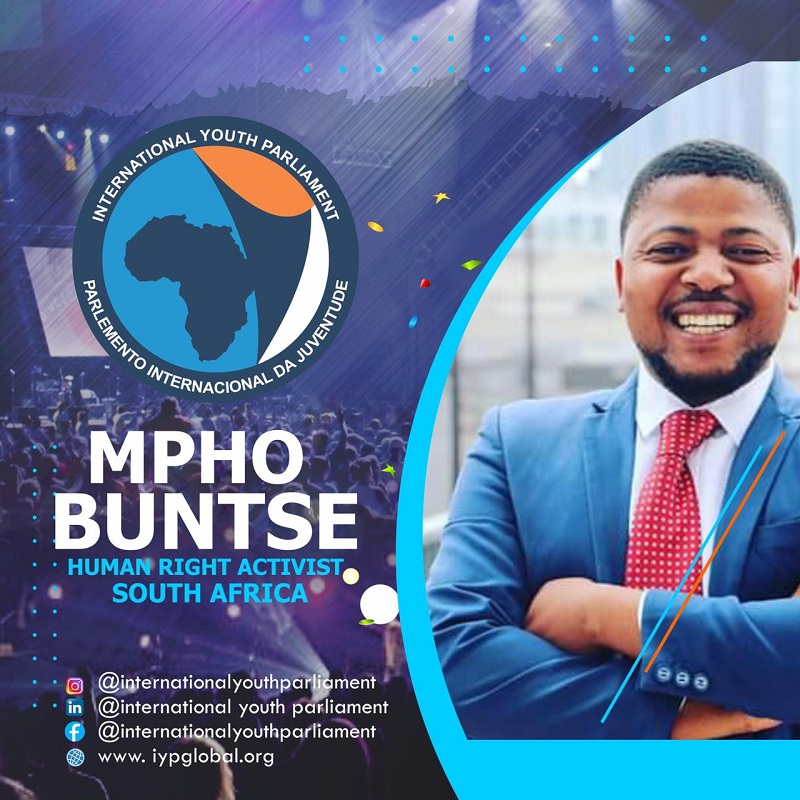 From South Africa 🇿🇦….
Mpho Buntse is a passionate youth development and civic leadership change agent with interest and experience in human rights, community mobilization, international relations and diplomacy -as well as Queer organizing. He holds a BA in Journalism and BA Honors in Communication Theory from the University of Johannesburg, He is also in pursuit of completing a Masters in Fundamental Communication. As an adherent scholar, his influence has had a prominent footprint marking academic developments over contemporary research including his masters project titled: Symbolic Annihilation, Public Service Broadcast and Mainstreaming of Sexual Minorities. He has led numerous major social justice and civic campaigns.

In his current role, as the Project Manager for Youth Engagement for the Southern African Communications Industries Association;he has developed university-based chapters of the association and established its Young Professional’s Forum with the extensive need to curate projects and initiatives centered on youth development in the technical communication industries. His travels to various parts of the globe continue to launch his passion to advocate for young hungry minds as well as amplify the Queer voice. Over the past few years, he was granted the opportunity to participate in various international initiatives including US Mandela Washington Fellowship and Europe’s Young Diplomats Forum. Buntse believes that absorbing the unique teachings which come with diversity becomes an important lived experience on the approach towards the idea of “Thinking global, acting local” when dealing with inclusivity and Queer issues.

His journey to learn and unlearn evolves as he explores different roles and environments he is exposed to- among them; Include various PR/ Publicity, print and digital media roles as well as competence in Google Digital Skills for Africa. Buntse has also served as a national spokesperson for civic movements such as the African National Congress Women’s League LGBTIQ Desk. With training in Civic Leadership from Drexel University, LeBow School of Leadership and from UNISA School of Business his efforts to modify the society do not end there. He is the founder of the annual Simon Nkoli memorial lecture launched in 2014, the lecture has grown and has been delivered in higher education institutions such as the university of Pretoria and Stellenbosch university. He is also the bainchild to the South African Higher education and the inaugural annual 30 under 40 SADC Queer Game Changer List, a list to profile LGBTIQ excellence in the sub-Saharan Region.