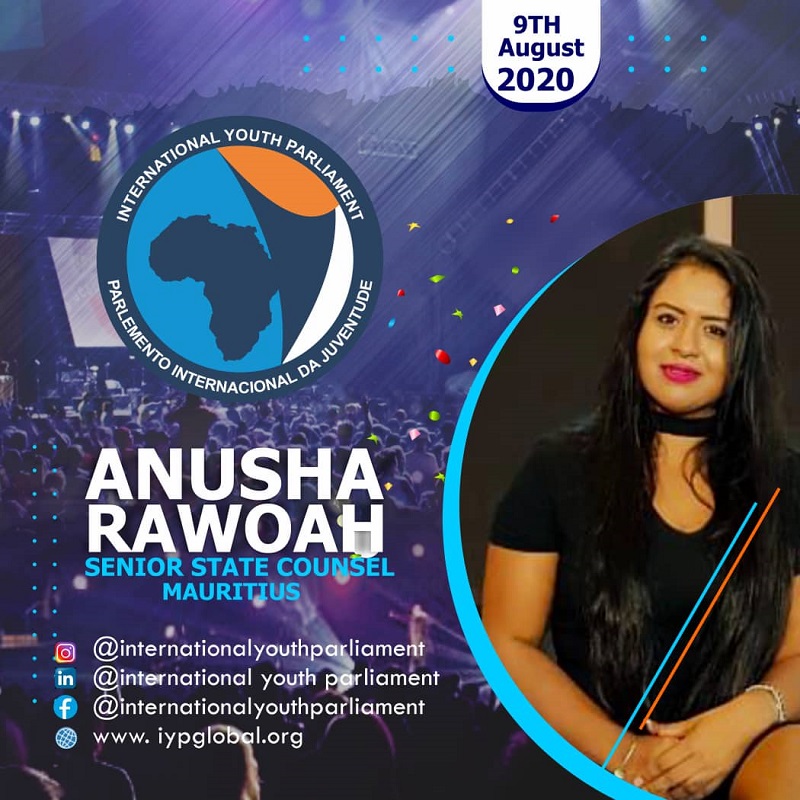 From Mauritius 🇲🇺…..
Anusha Rawoah is a Senior Prosecutor (Senior State Counsel) Mauritius. She is also a professor of law at the University of Mauritius. After studying her LLB (Hons.) Anusha was awarded the UK Chevening Scholarship to pursue her LLM in Queen Mary University of London. She was also awarded the Mandela Washington Fellowship under the aegis of the Young African Leaders Initiative. She studied Public Policy and Management at Georgia State University in the US. Anusha was also invited by Her Majesty the Queen Elizabeth to a reception for Commonwealth, Youth and Education at the Buckingham Palace, London.

Anusha Rawoah is very passionate about criminal justice and believes that no justice can be served until we adopt a victim oriented approach. She prosecutes a variety of criminal cases including sexual and reproductive rights related cases. She has over 12 years of experience as a lawyer. She is also a Sexual and Reproductive Rights advocate in the Sexual Rights Africa Network. She is also very active within the Africa Prosecutors Association and has been coordinating to organise events and workshops on Trafficking on Persons and financial crimes with the UNODC and also the American Bar Association. She has also participated as panelist in the Annual Conference of the International Association of Prosecutors as well as the African Conference on Sexual and Reproductive Rights. Anusha Rawoah is also the editor of the Office of the DPP’s monthly newsletter and believes that imparting of information on legal issues is crucial if we are to combat crimes.

Anusha has been very active in providing training sessions to law enforcement officers in Mauritius. She has also participated in various regional and international conferences as speaker and panelist to advocate for rights of victims. Anusha Rawoah is a proud member of the International Youth Parliament. She believes that inclusion is at the core in making a community a better and safer place to live in.